An amazing trip but as you will see by the amount of photos we really enjoyed the outback and North Western Australia. Please click on photos for larger image.

March 2004 we made the decision to down tools and explore Australia and New Zealand in depth. And it was one of the best decisions we ever made.
After 12 months of planning and research we flew into Brisbane on 30th March 2005 and so our adventure began.


If anyone only has a limited time to travel we found the most amazing places were ..... starting with the Great Ocean Road to Adelaide and then up through Alice Springs to Darwin and then especially from Darwin to Perth. Although we did enjoy the Birdsville Track ..... in fact, any of the inland/desert places as well. But we enjoyed every part of this magnificent country.

The route we travelled starting from Brisbane heading north 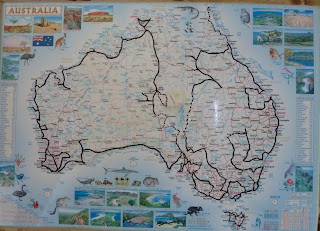 WHY WE CHOSE A CARAVAN AND LANDCRUISER

We debated the pros and cons of a caravan, motorhome, converted bus and fifth wheeler.


We travelled to Brisbane in June 2004 to attend the Brisbane Caravan Show to mainly look at a Jazz fifth wheeler.

We fell in love with it. It was American built with all the home comforts but by the end of the second day we had both decided it wasn't right for us. Some of the reasons we went off it were:


We looked at the Australian fifth wheelers available but at that time they were not in the same class as the American ones.

So we went back to the show for a third day to look at caravans.

Australians do build great caravans but we didn’t see anything that we particularly liked at the show.

While staying with Ross and Jeannine at Mooloolaba after the show we found Roadstar caravans at Caravan World in Woombye on the Sunshine Coast. We liked what we saw and were very impressed with the knowledge and service of Ros Flynn. She answered all our questions and explained why she advised what she did.

Another reason we bought a caravan and landcruiser was because the Landcruiser is great to drive and ride in and as we were going to be doing a lot of kms in the next few years we decided we needed a bit of comfort.
We liked the idea of being able to park the caravan and then tour with just the Landcruiser when we wanted to.
Also thought it would be good to have a 4wd especially in Australia.

We bought a Lemair washing machine. It’s Russian, automatic, plastic, weighs 17kg, washes very well, spins well and uses very little battery when bush camping. It sits free standing in the bedroom and we put it into the shower cubicle and connect to the shower water and drainage to do the washing. It takes 2.5kg, not a lot but still worthwhile having. We were advised to keep the internal packing and use to keep the bowl from jumping about while travelling.

We chose a Roadstar chassis with independent suspension. Our caravan chassis has a 150mm A frame which is carried through to the end of the suspension. It sits very high which is good for travelling over uneven roads.


We also noted that the “on-road” chassis only allows a loading of 400kg for personal effects and as we wanted 3 80 litre water tanks (240kg in water alone) we needed to increase the loading to 800kg.

(Edit: Since our caravan was built Roadstar started using light weight materials and Caravan World stopped dealing with them. Roadstar also went into receivership and although they are producing caravans again we met a couple recently who preferred their earlier models).

The design we chose has an extra long double island bed - we weren’t sure how we’d cope without a king size bed but we’re both sleeping really well. We have a combined shower/toilet/handbasin and this works really well. The hand basin is a bit small but we cope OK. It is great having the chemical free vacuum toilet as we can empty the cassette at any sewerage point without upsetting the natural cycle of septic tanks.

We preferred to have more lounge seating than a full ensuite and this also allows us to have views from all windows. So often we back into a place where the view is out the back window and we can take full advantage of it.

The kitchen has a pantry and plenty of cupboards. The gas 4 burner hotplate, grill and oven and exhaust fan work well. The Dometic frig works equally well on electricity or gas and just holds the temperature on battery power for when we are travelling. (Edit: we had major problems with this frig, a 186litre caused by not parking level – thankfully the 175litre does not have the same cooling system)

Our solar panels, battery system is automatic, all we have to do is turn the control panel to 240v, gas or auxillary, whichever we are using. We have a control panel showing the volts, amps etc so hopefully we won’t run the batteries low. All our lights are 12v which means they all work off the battery system when we are freedom camping and not plugged into 240v power. We have a 1200w pure Sinewave inverter which converts three of the power points from 12v to 240v. Essential if using electronic equipment such as a laptop to avoid power surges. As I’m writing this (April 2005) the solar panels are putting power into the batteries even though it is raining and very cloudy.

The water guage shows how much water we have left - not sure how accurate that is yet but will give us a good idea as to when we need to top up again. The caravan comes with a water filter in the kitchen but John has also fitted another filter so all the water coming into the caravan tanks is filtered. Apparently the water is not so good further into the outback and needs to be well filtered.

Our hot water system is gas and electric and heats up in a very short time so if we’re freedom camping we just turn it on 10 minutes before we want to do the dishes or shower. But if we’re connected to 240v we have hot water all the time.

The Hayman Reece hitch is a weight levelling and anti sway system which works well. The caravan is very easy to tow - I towed it the other day and I felt quite confident but I think John was pleased to get behind the wheel again once he’d had his sleep.

The reason we bought in Australia is that we would have to get a Carnet (a Customs document) if we had brought a vehicle into Australia from New Zealand we would only have been able to stay for 12 months or lose a 60% bond if we stayed longer.

We had reverse backing sensors fitted to the Landcruiser as I (Margaret) have trouble judging distances when parking but unfortunately when the Hayman-Reece hitch is fitted to the rear of the Landcruiser it activates the sensors. We asked a couple of auto electricians about getting a switch put on to activate them (they automatically activate when the vehicle is in reverse gear) but that was going to cost about $150 so we gave it a miss. Then John found a connection in a back cubbyhole of the Landcruiser that can be taken apart to de-activate them. So this is what we do. If I’m going to drive the Landcruiser by myself John can take the Hayman-Reece towbar off and re-connect the sensors.

I spent a lot of time on the internet researching our adventure and through this met other NZ people either touring Australia or planning to. One couple we met was Smillie and Grant Henderson who have given us a lot of advice. It’s made our choices much easier having their experiences to either follow or not. They do a lot of freedom camping and this is something we are just getting into. At average $20 per night in a camping ground it soon adds up over a year and it’s nice to have the freedom associated with freedom camping.

Sightseer
John and I travelled Australia in our landcruiser and caravan for 2 years which was a fantastic adventure. We are now living in our motorhome seeking out the best places in New Zealand. A wonderful life!